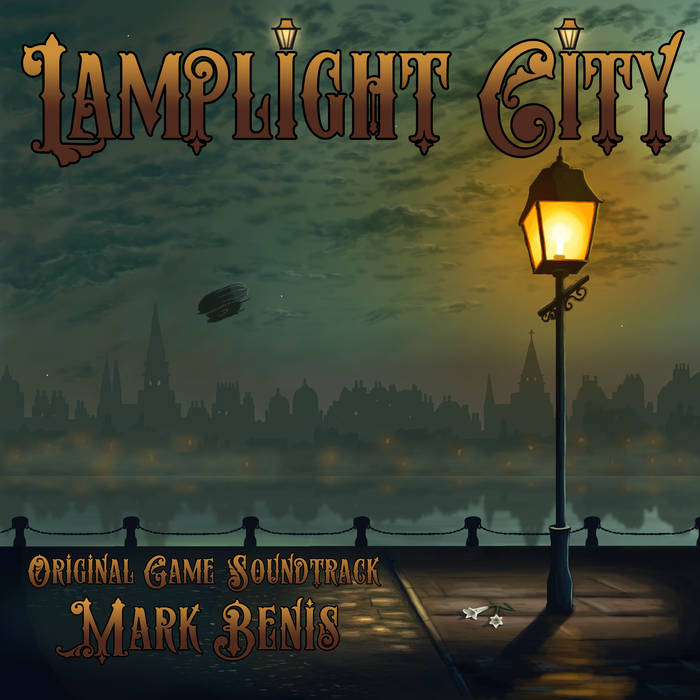 Lamplight City. The name alone conjures up ominous scenes and sounds: a dark alleyway, seedy figures in the night, a flickering street light. The artwork opens up a window into a dystopian world, and through this setting a story of mystery, murder and the macabre comes to life.

Getting to work on a project like this that is so innately inspirational is one of the true joys of being a composer. Here it is less my job to create a score and more so to uncover what sounds the game conveys all on its own. And after picturing the city streets and imagining the characters going about their lives, pieces of the puzzle started to fall in place: a high piano note for that flickering street light, tremelo and pizzicato strings for the dark alleyways, an unsettling harp for the unbreakable bond between our two detectives, Miles Fordham and Bill Leger. To have such associations flow so seamlessly is not a testament to the skill of a composer but rather the integrity of the world that the music comes to inhabit.

Though I may have written the score, I share much of that credit with developer Francisco Gonzalez. Without his vision and encouragement to experiment, I don't think I would have ended up with anything close to what I have today. I only hope my music shows what a wonderful time I've had exploring every corner of Lamplight City and how thankful I am to be a part of this game.

Grundislav Games is developing Lamplight City for PC, due for release in 2018. www.grundislavgames.com

"Lamplight City (Original Game Soundtrack)" was made possible by the following individuals:

“Down Among the Dead Men” lyrics adapted by Francisco Gonzalez

Special thanks to: my mentors Mark Suozzo, Irwin Fisch and Alan Silverman, Ron Passaro for helping me find the sound of LC, Sebastian Wolff for all his work behind the scenes, Kevin Won for his mixing advice, my family for supporting me, and finally Francisco Gonzalez for being someone I can call much more than just a collaborator.

For complete credits and information about this release, please visit Materia Collective: www.materiacollective.com/music/lamplight-city-original-game-soundtrack

Mark Benis is a composer, game developer, and co-director of the production studio Moon Moon Moon. He has contributed to games like Wolfenstein: Youngblood, and his score to Lamplight City was nominated for a Game Audio Network Guild (G.A.N.G.) Award for “Best Original Choral Composition”. ... more

Bandcamp Daily  your guide to the world of Bandcamp

MF DOOM is given his flowers, plus appearances from MC Jada Imani and Stanley Ipkuss